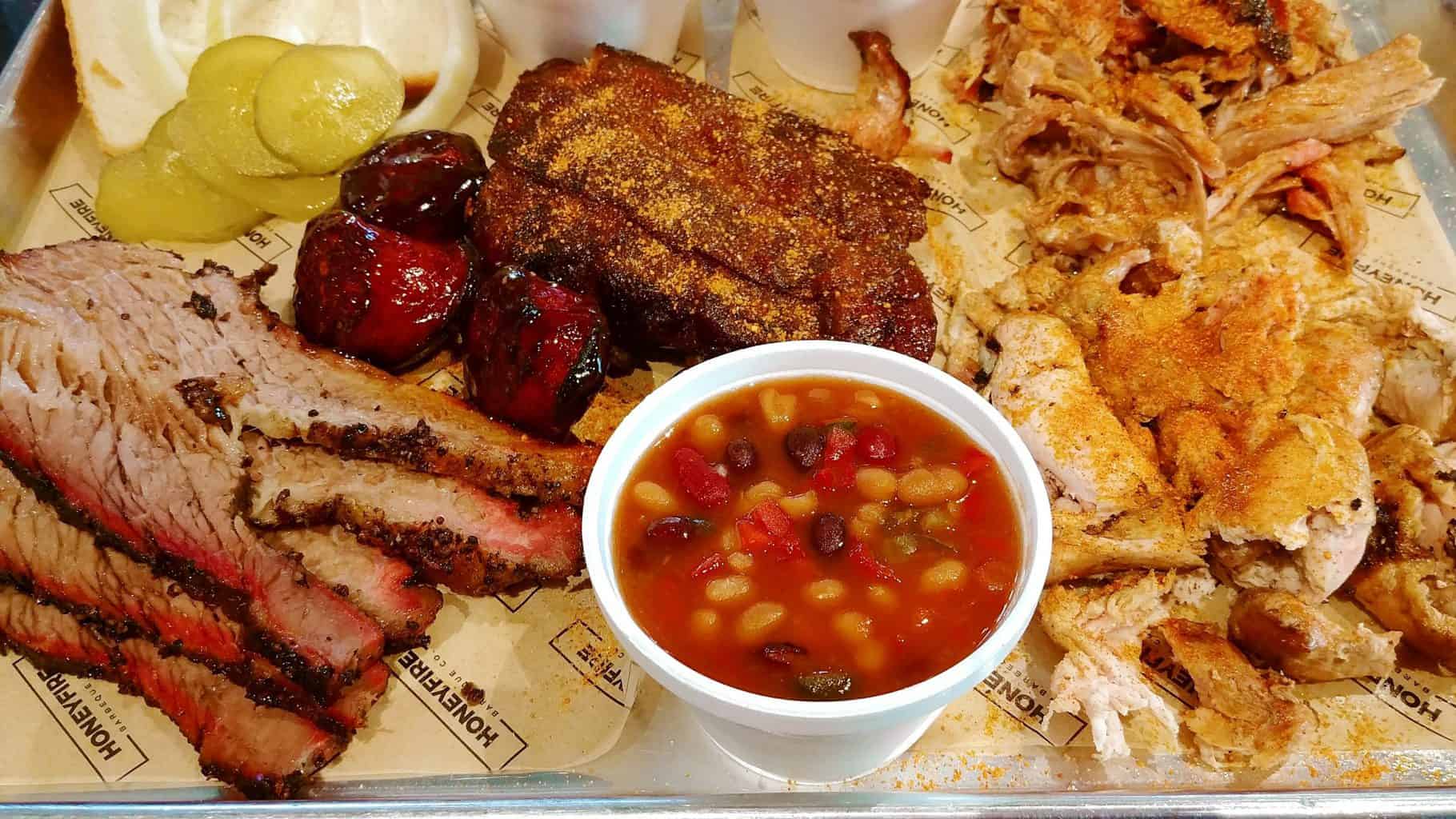 Bellevue is only 10 minutes away from downtown Nashville, right off I-40 and US 70 South.

HoneyFire BBQ is in a relatively new multi-use community called One Bellevue Place.  People can live, shop, and be entertained there.  One Bellevue Place has 300 apartments, professional and medical office space, restaurants, and an AMC 12 movie theatre. It has two ice skating rinks in a sports facility hosted by the Nashville Predators and Ford.  The Ford Ice Center opened in October 2019.  The Sports complex features twin-rinks which will allow hundreds of hockey teams and figure skaters to compete, train, and practice locally. They even give lessons. (At this time they are closed because of the Coronavirus; check their website for updates).

This location is where the old Bellevue Mall used to be, but it was torn down in 2015 after a decline in shoppers and stores moving out because other area malls drew shoppers away.

A Little About the Bones of HoneyFire BBQ

We were happy to dine at HoneyFire BBQ, home of Grand Champion BBQ Pitmaster Shane Nasby.  He started out catering in Middle, TN, then lucky for us he opened a brick and mortar with business partner Ben Claybaker.  I loved their clean lines with the black and white interior where you can sit inside or outside on their wrap-around porch. There is a grassy area between their restaurant and other Nashville favorite places to eat; a favorite for us is DeSano Pizza, which has amazing pizza!

What We Ate at HoneyFire BBQ

We enjoyed a little of almost everything! There were eleven of us, so we got a chance to eat a variety of dishes.

We started with a drink called Kentucky Mule, to which they add Fireball Cinnamon Whiskey for a twist. Our bartender Ryan was full of personality, as you can see, and he was an excellent sport to allow me to take a few photos of him!

Ryan told us they carry a large variety of whiskeys, over 170 of them to be exact, and many are local to the area.

My husband and I got the Four Play dinner tray, which consisted of pulled pork, pulled smoked chicken, beef brisket, HoneyFire ribs, smoked kielbasa sausage, which was terrific! The way they prepare the kielbasa is extra delicious, and I am not a sausage lover!  The sides we chose were mac and cheese, which they make with a white queso sauce, corn pudding, and bourbon baked beans.

Unfortunately, we did not have room for dessert.  It all looked so tempting; they have PB banana pudding, a creamy pudding layered with Nutter Butter cookies, bananas, peanut butter, and whipped cream; a sugar cream pie that consists of silky sweet filling on a buttery crust; and a key lime pie. They even have chocolate chip cookies with candied bacon on top of it.  The next time we go to Nashville we’re going to try it!

Let us know if you have ever been to HoneyFire BBQ.  If you have, what is your favorite dish?