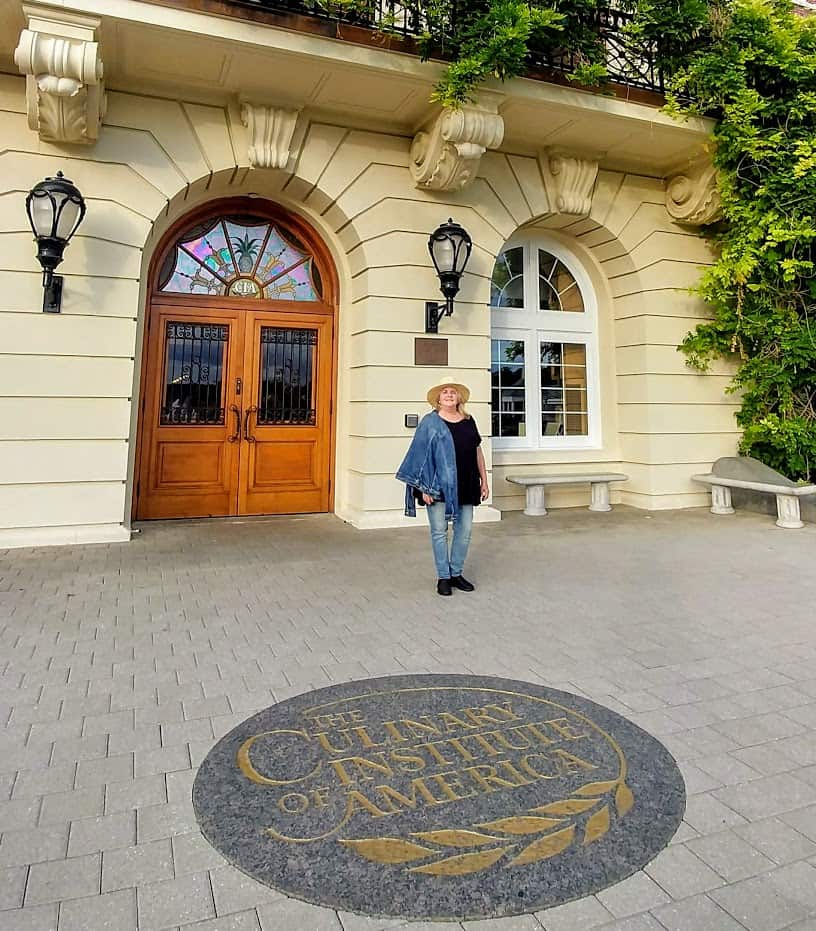 Have you ever thought of going to cooking school? 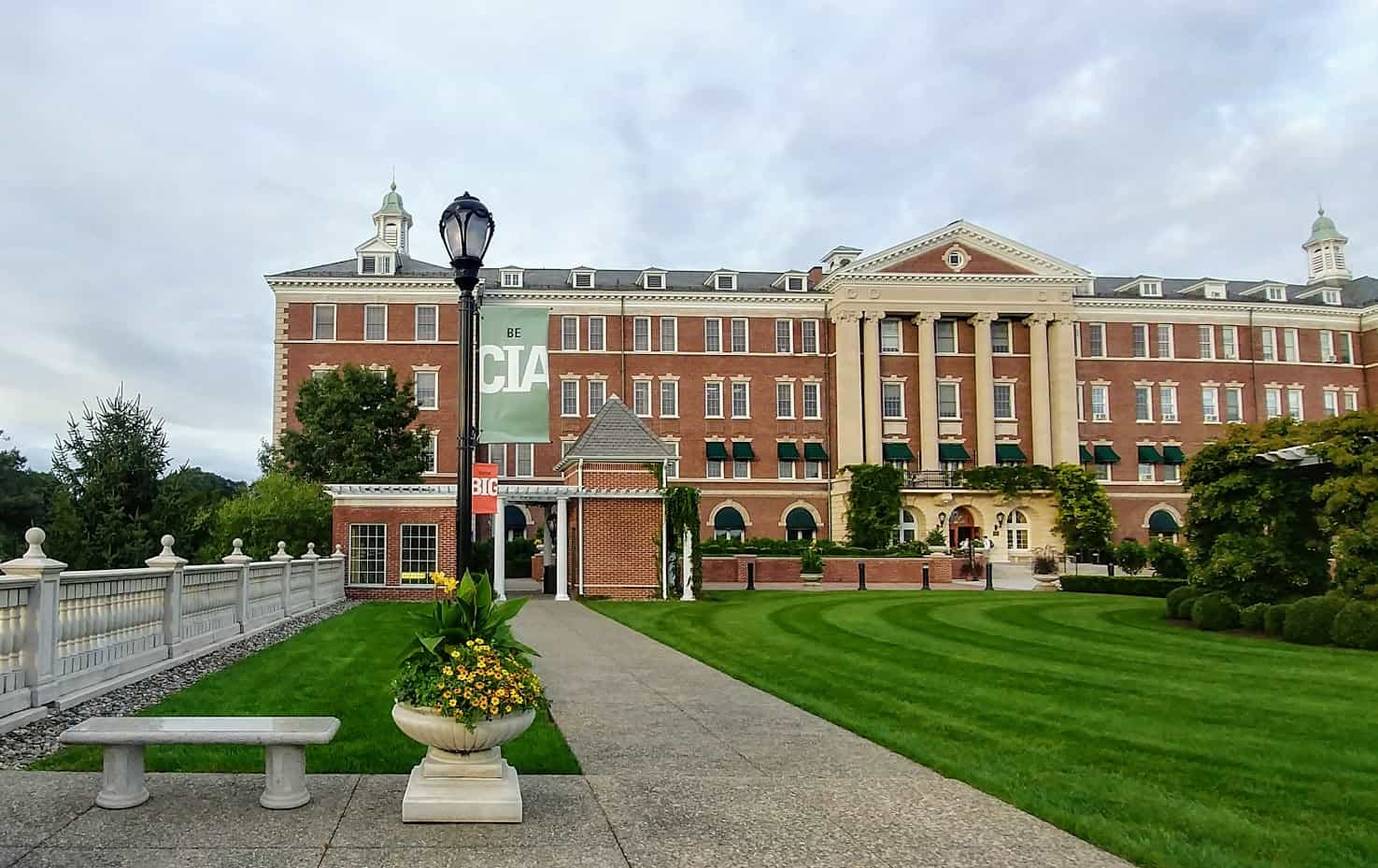 Well, I have, ever since I was in my early twenties. 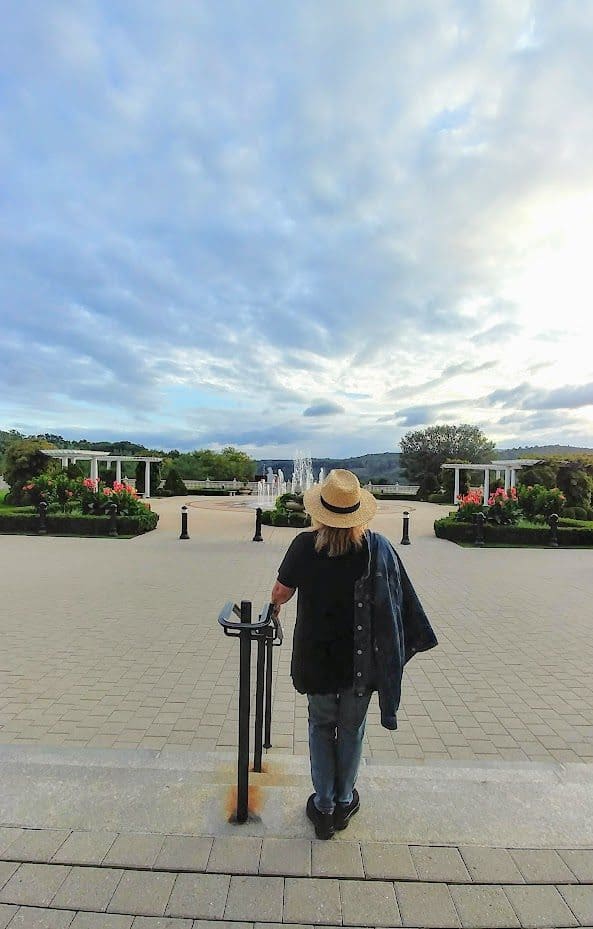 One of the culinary schools that was on my radar was the Culinary Institute of America (CIA) in Hyde Park, New York, because I was born in the area across the Hudson River. Also, I  know some of the great chefs who attended the CIA and I saw what great training they had. 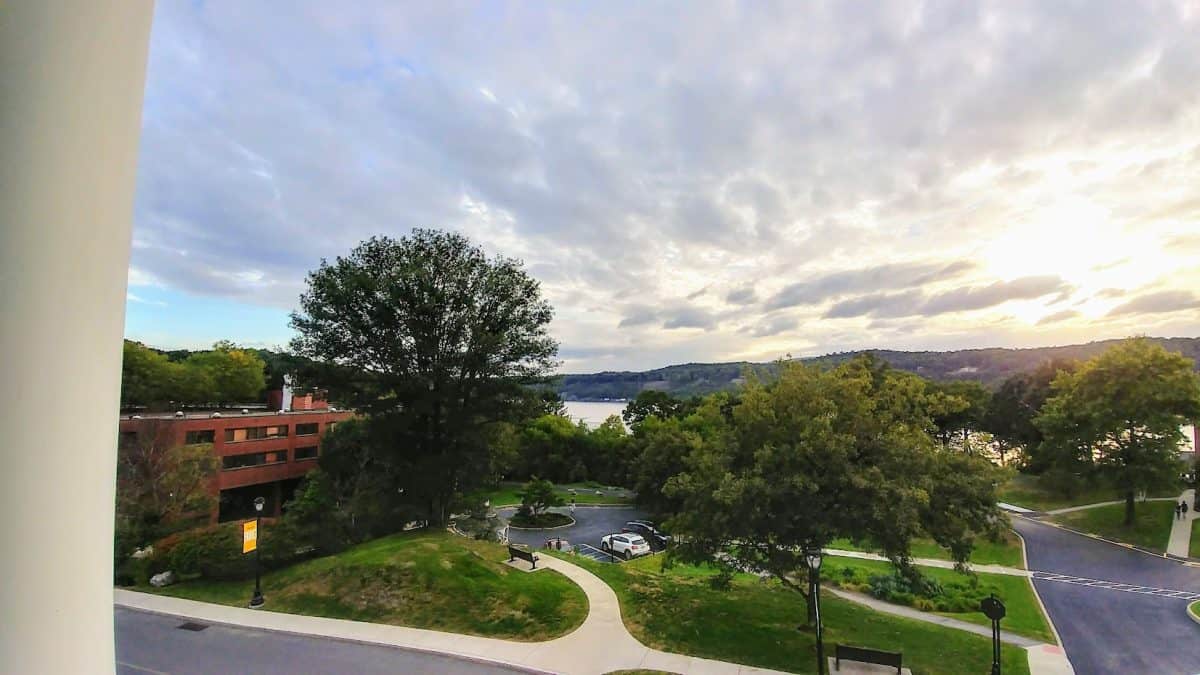 Such a beautiful campus, situated right on the Hudson River. 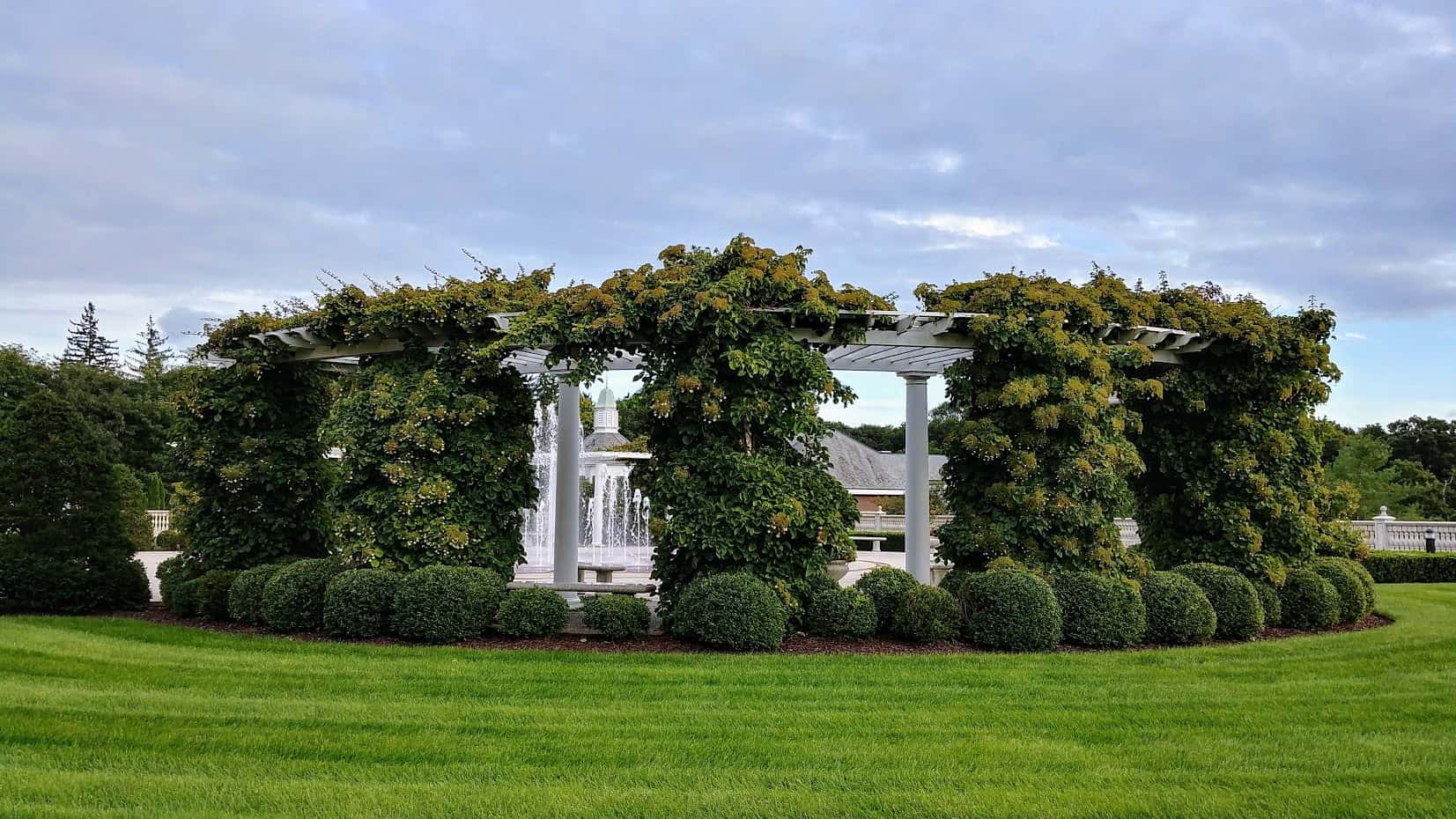 The landscaping is perfect for this campus. 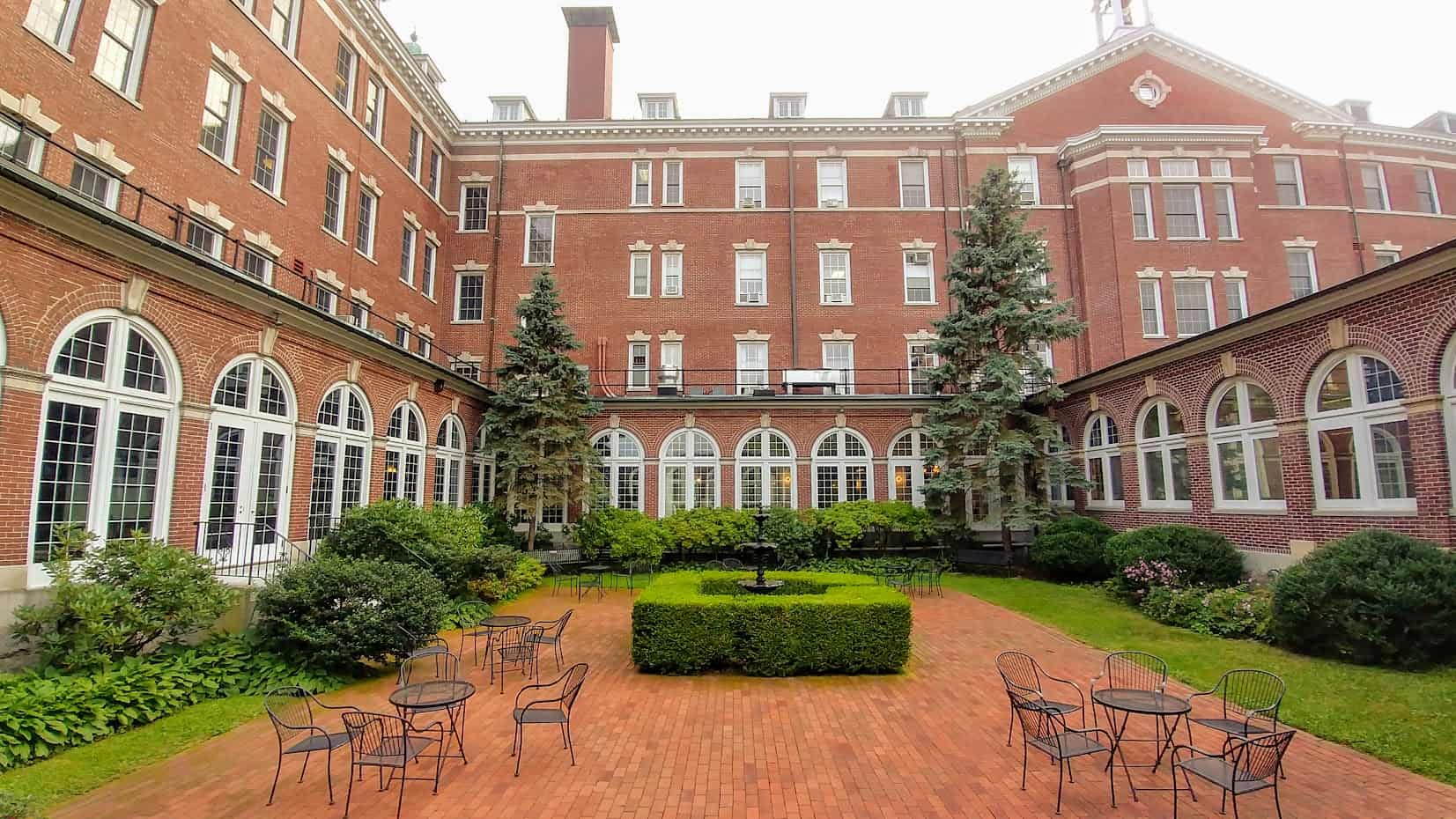 Lovely courtyard in the middle of CIA campus. 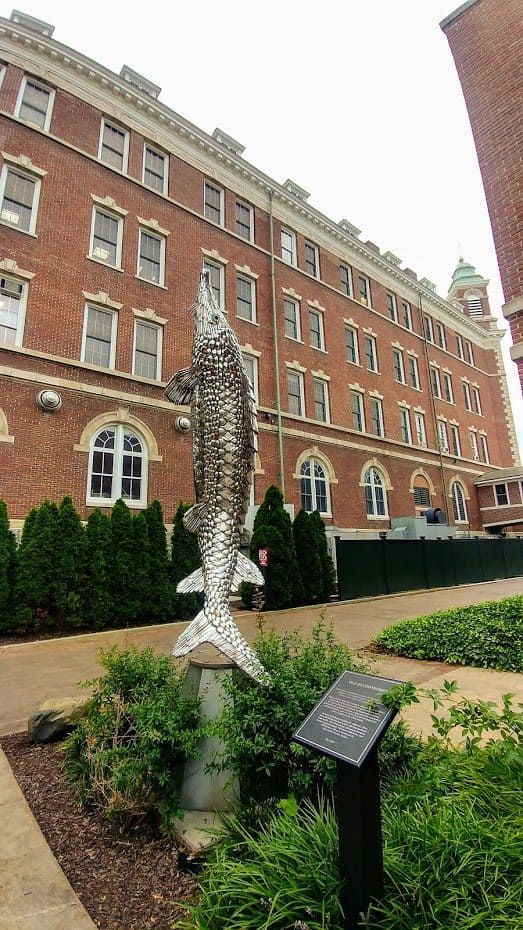 Sculpture made of knives and spoons! 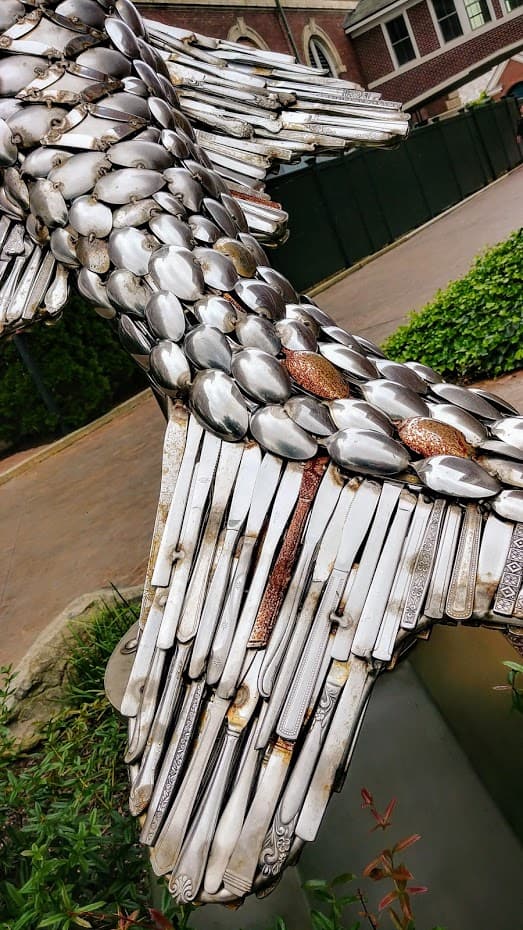 Love the character it brings to this fish!

Believe it or not, I never had a chance to eat at one of their student chef restaurants while I lived in New York, so this past trip I was happy to eat at the Apple Pie Bakery Cafe.

I had lunch with my cousin Mariellen, who lived next door to me when we were all children.  My sister joined us, as she was with me on this trip to New York. 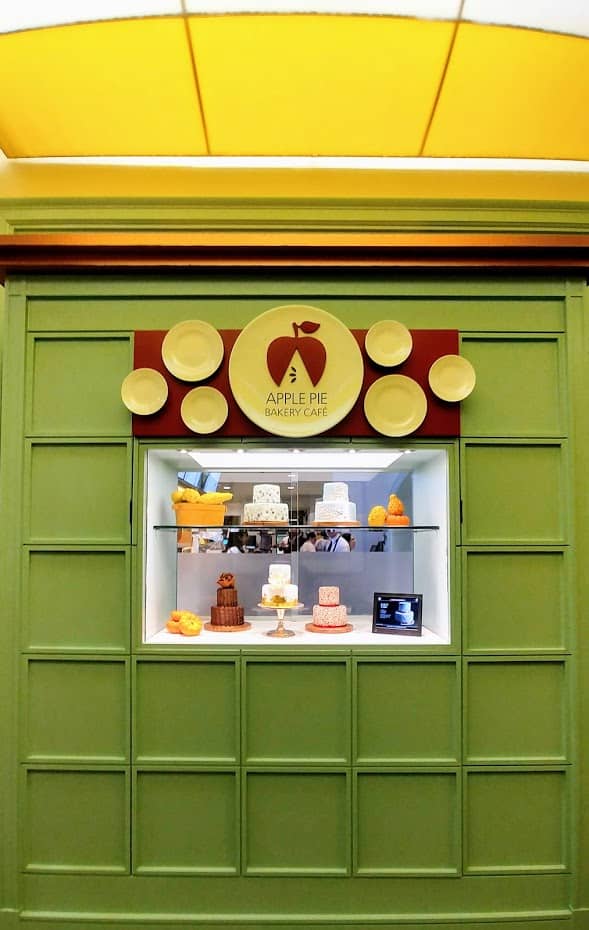 Lovely desserts to choose from. 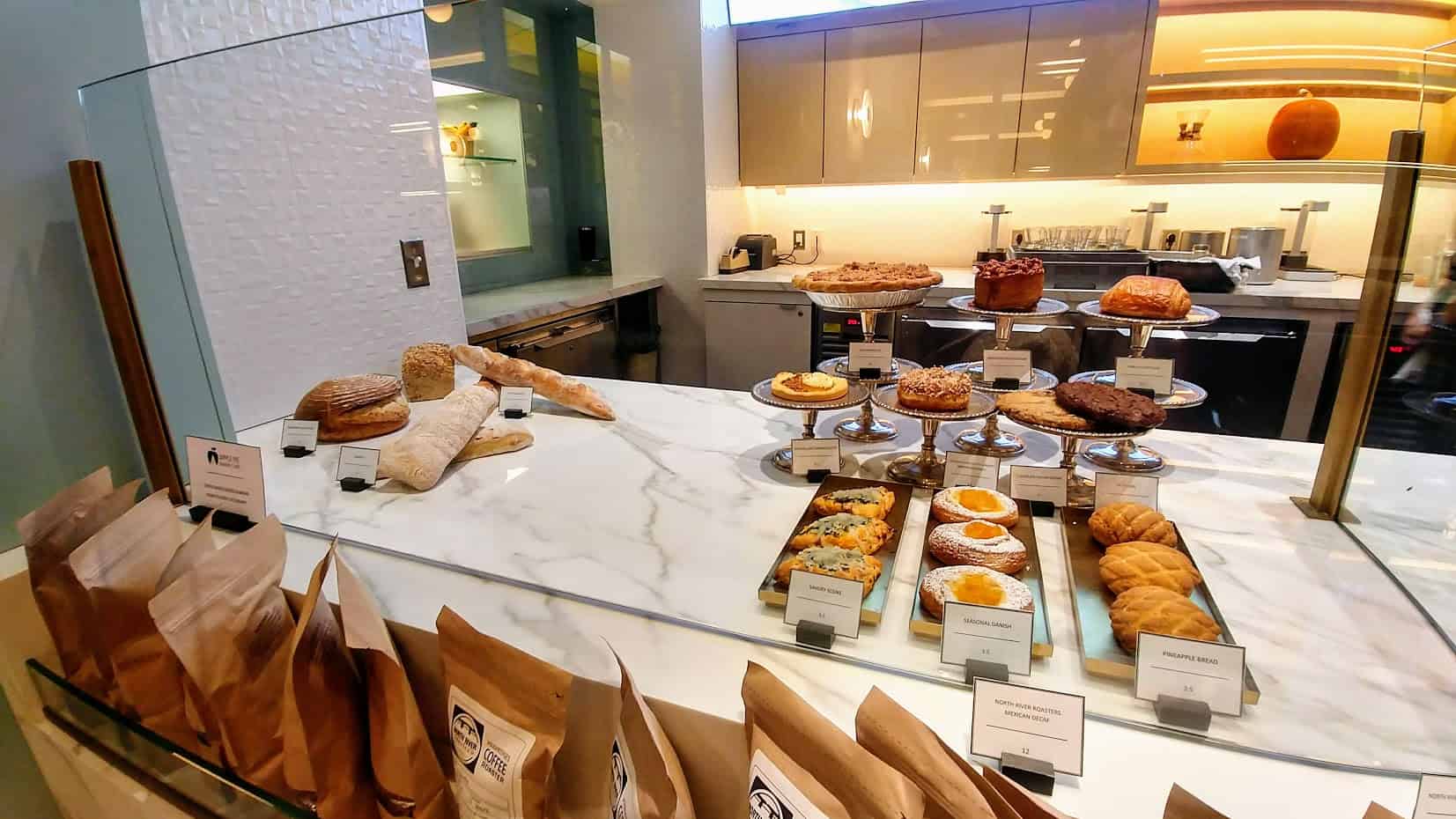 They had not only sweets but savory dishes.

I enjoyed their wonderful dishes. I was able to get to know some of the up and coming new chefs.  These chefs made all of the dishes we had that day. 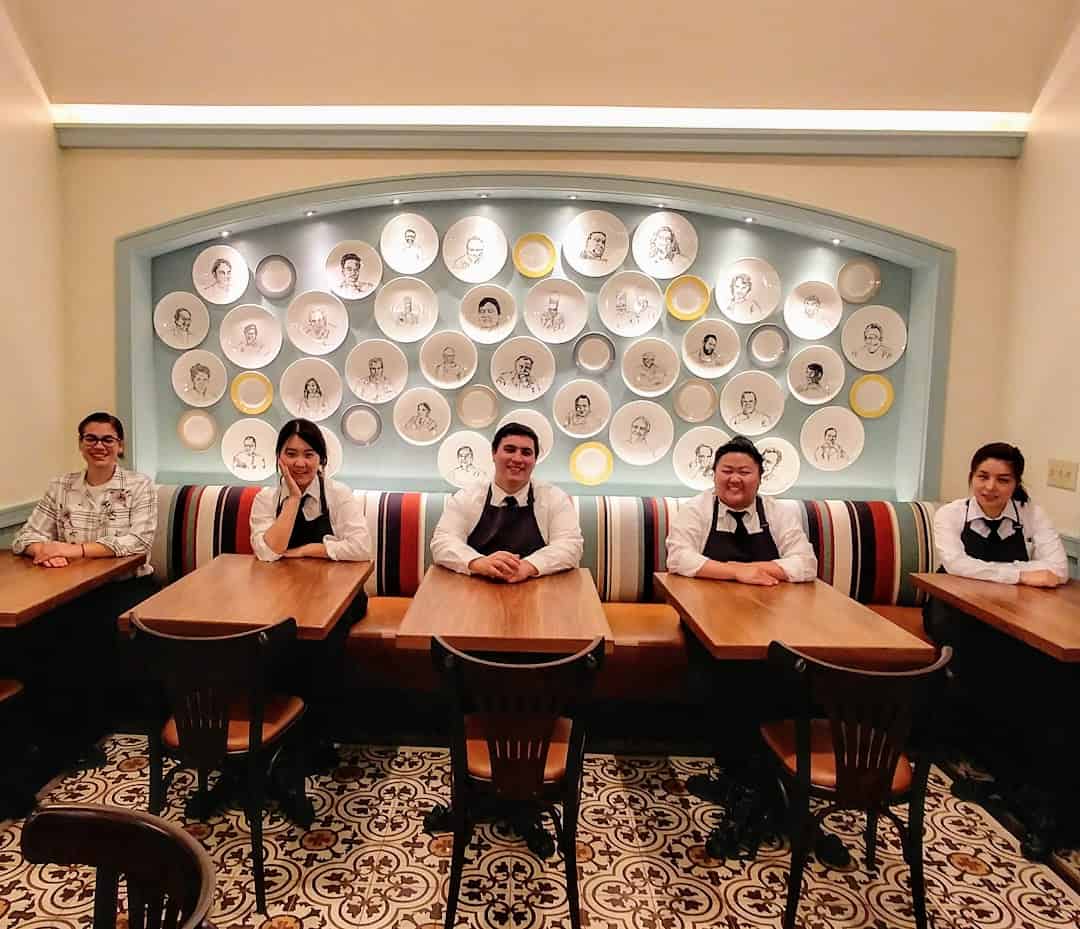 Ashley was one of the chefs who served us (seated second to the right and see picture below). I also got to speak with a few other chefs and hear about their interesting career aspirations. 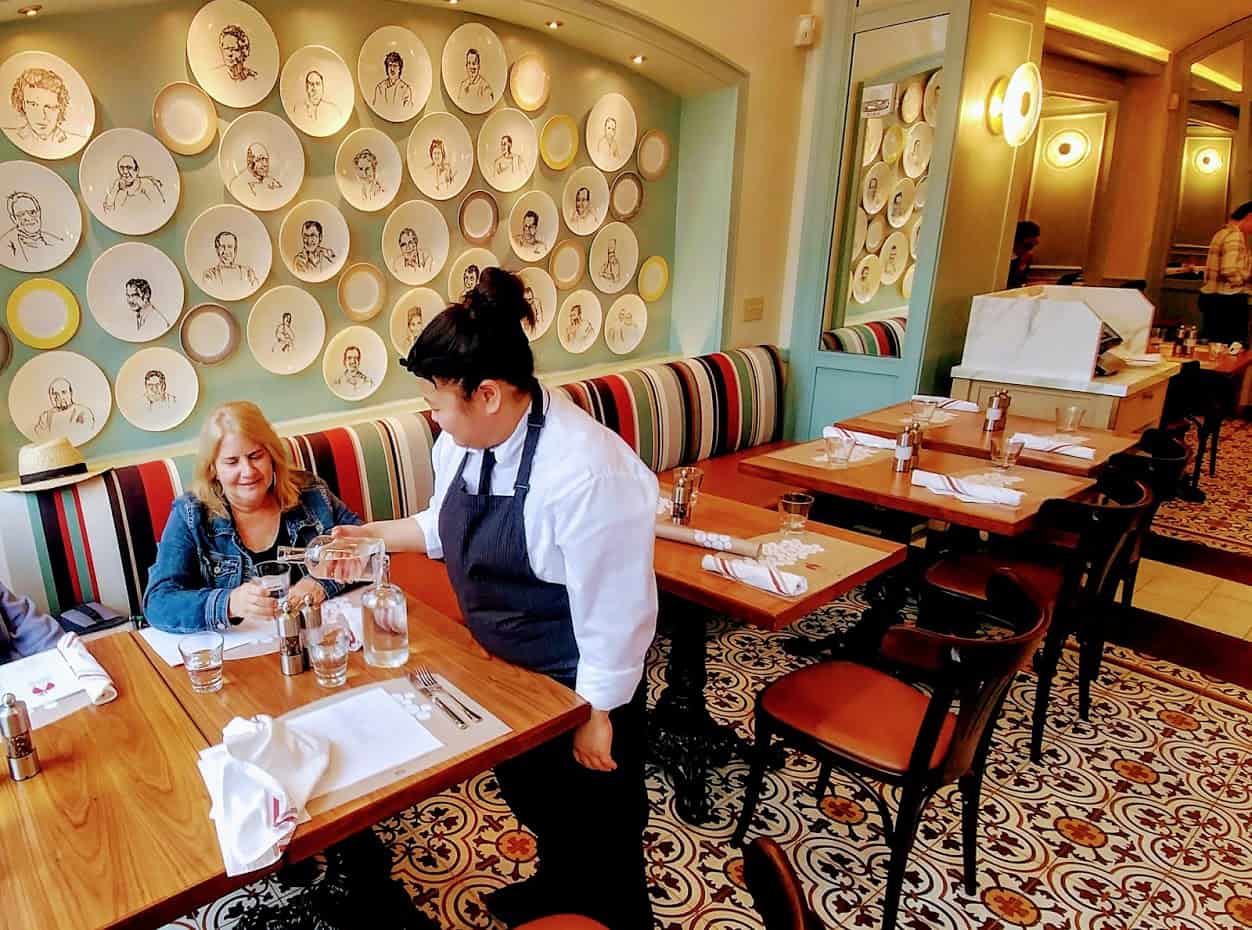 Most want to become pastry chefs, and one wanted to become an instructor; she has her sights at being one of the CIA teachers. All have high expectations, which is no surprise, being they are taught by some of the best in the culinary field. 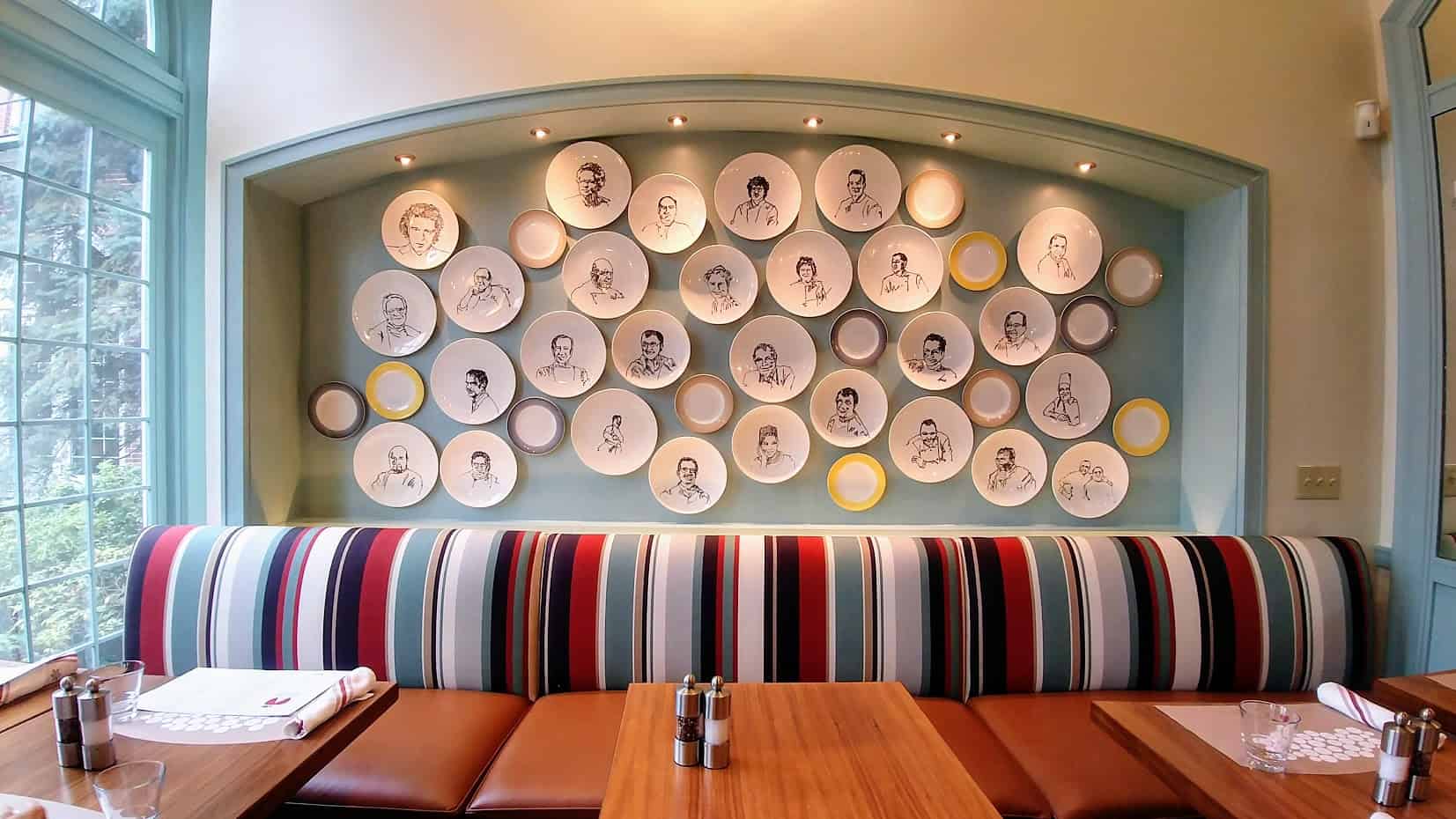 The Apple Pie Cafe was painted in a soft aqua ocean blue, which I loved (same color of my own kitchen).  Some of the walls had plates hanging on them.  The plates had drawings of many of the previous attendees of the CIA, including Julia Child. 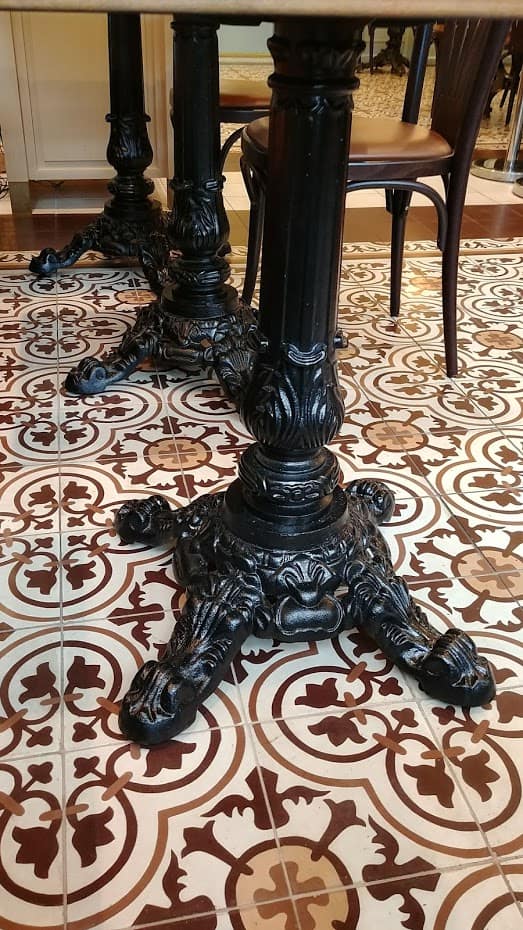 The tables were marble with a black iron-sculpted stand.  The table legs had great detail, as if you were in Paris, France. 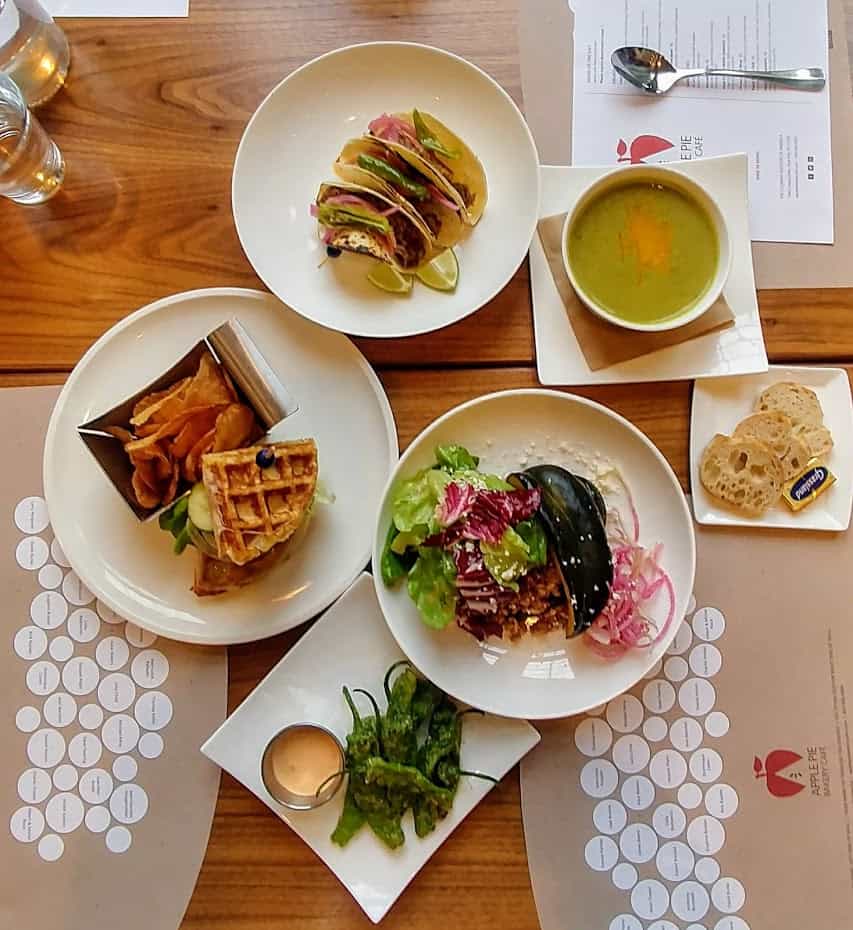 We decided to order several small items so that we could try many of their dishes.  By the way, this is a great way to eat when you are traveling.  This way you can try a variety of foods without breaking the bank or overeating. 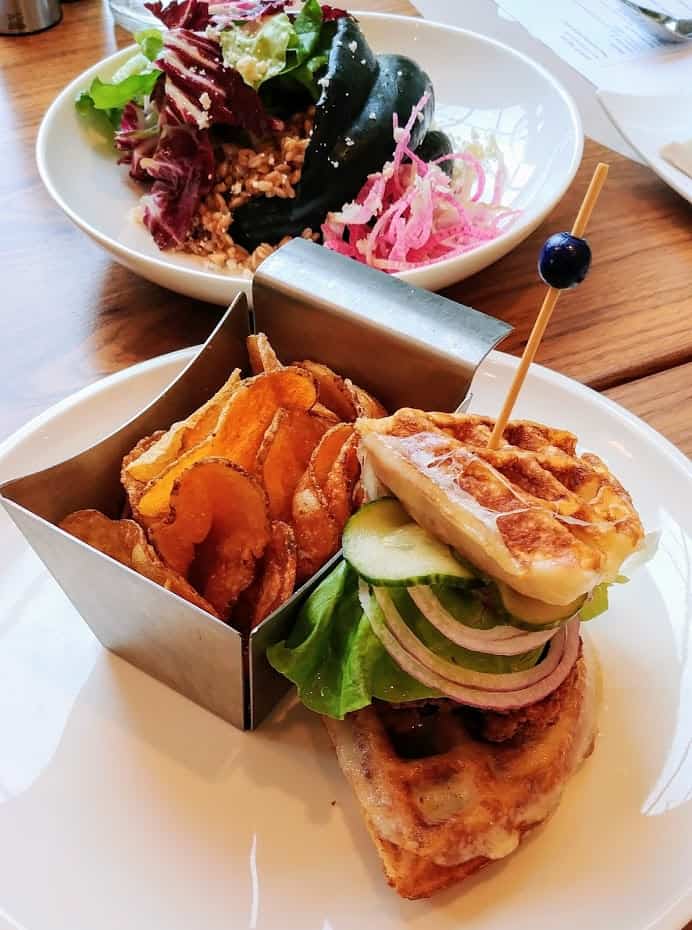 We started out with a Fried Chicken Waffle Sandwich, which consisted of fried chicken thighs, delta sauce, pickles, red onion, bibb lettuce, and provolone cheese.  The waffle was light, and the fried chicken was cooked to perfection.  Both were easy to cut in half, they did not fall apart, and they were easy to hold, allowing us to take several luscious bites.

The Cream of Broccoli soup was not a dense consistency as you would imagine, but full of flavor. It was on the lighter side so that you didn’t get overstuffed, which I really liked; it hit the spot. 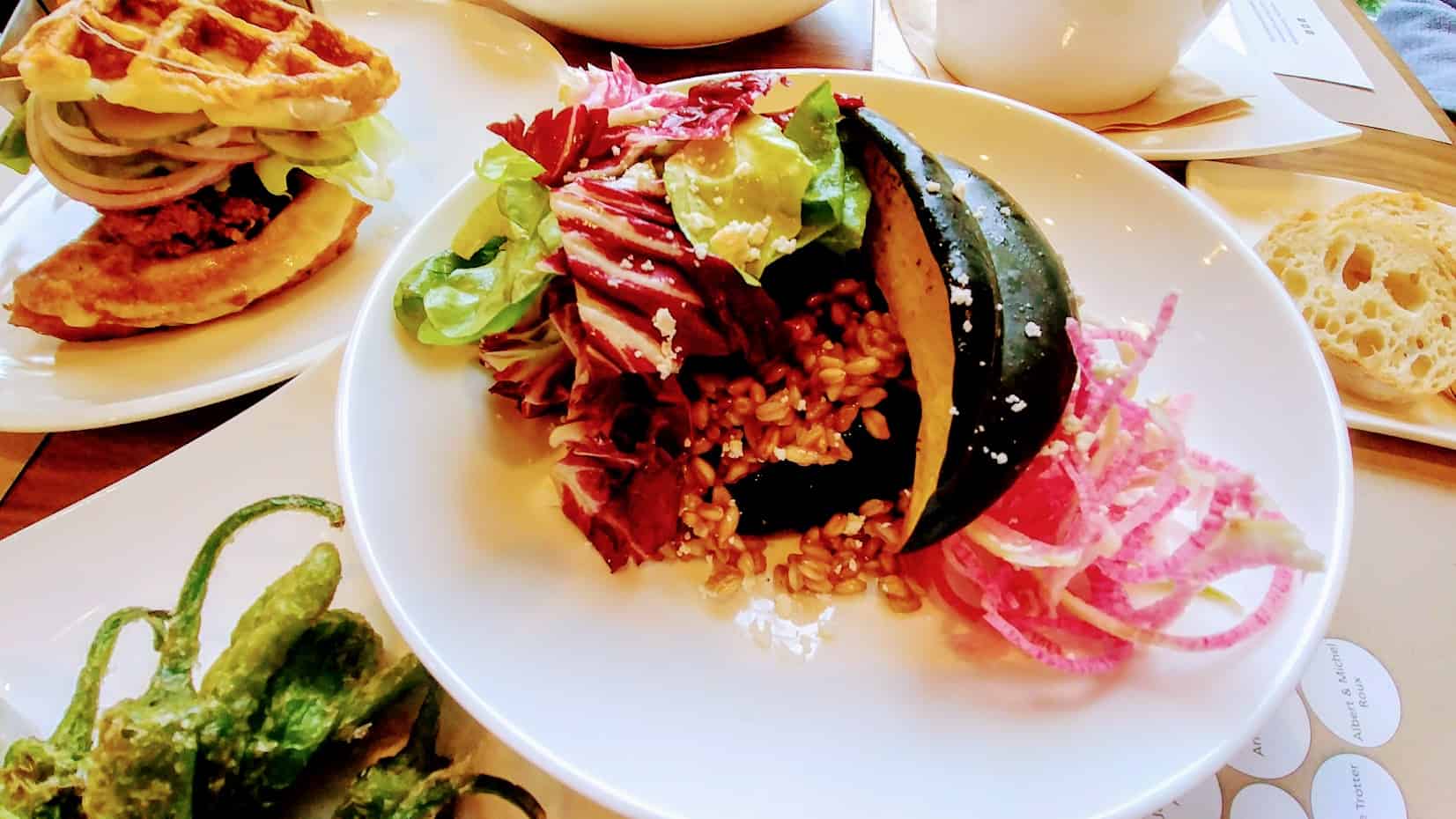 Also, we had their Acorn Farro Salad which consisted of roasted acorn squash, escarole, red onion, radicchio, topped with ricotta salata, and finished with a light local apple cider vinaigrette. 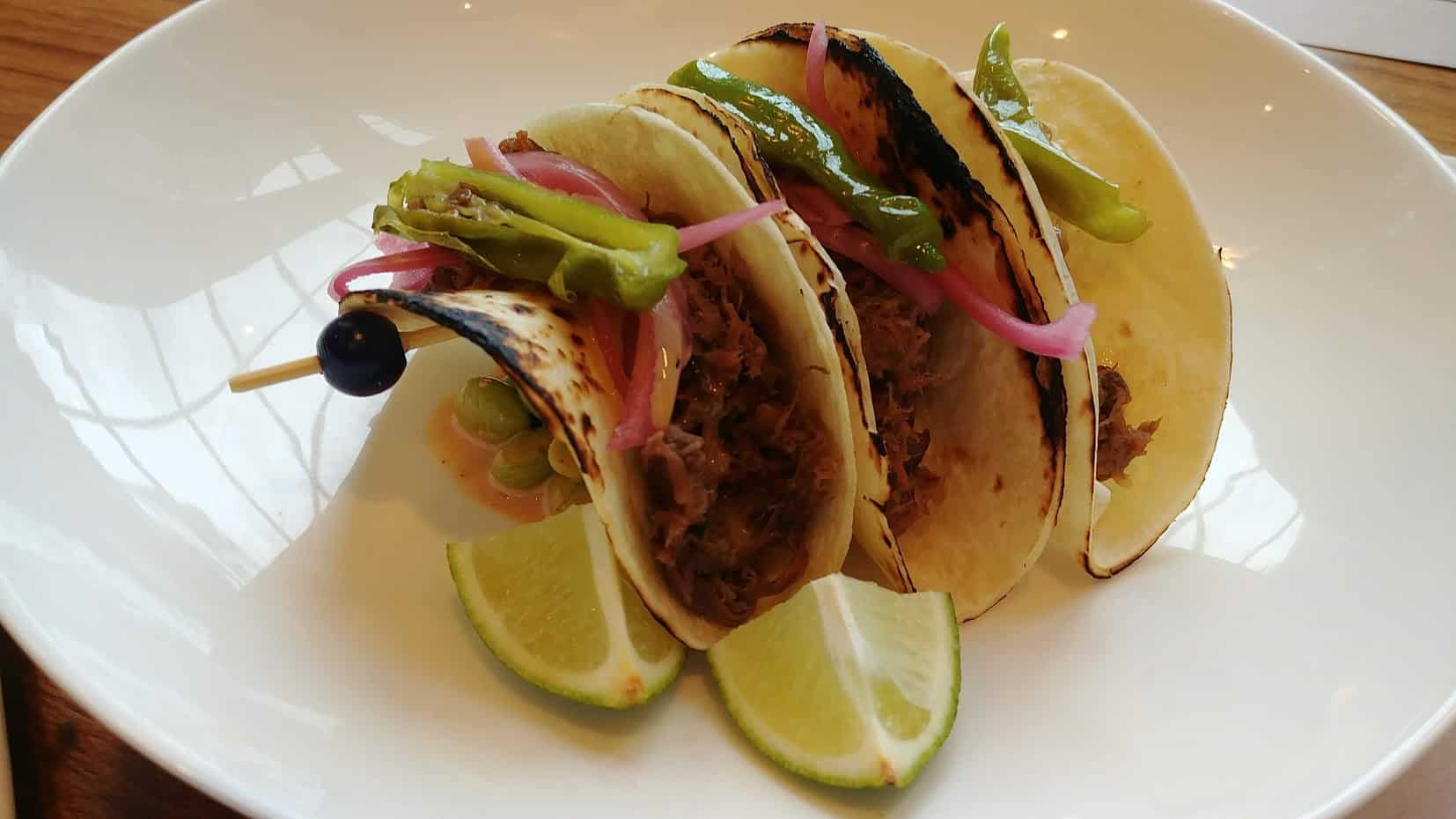 The Short Rib Tacos: this dish came in a perfect count of three, which was great for the three of us. The ingredients: bok choy slaw, hoisin aioli, pickled red onion, and the flour tortilla. 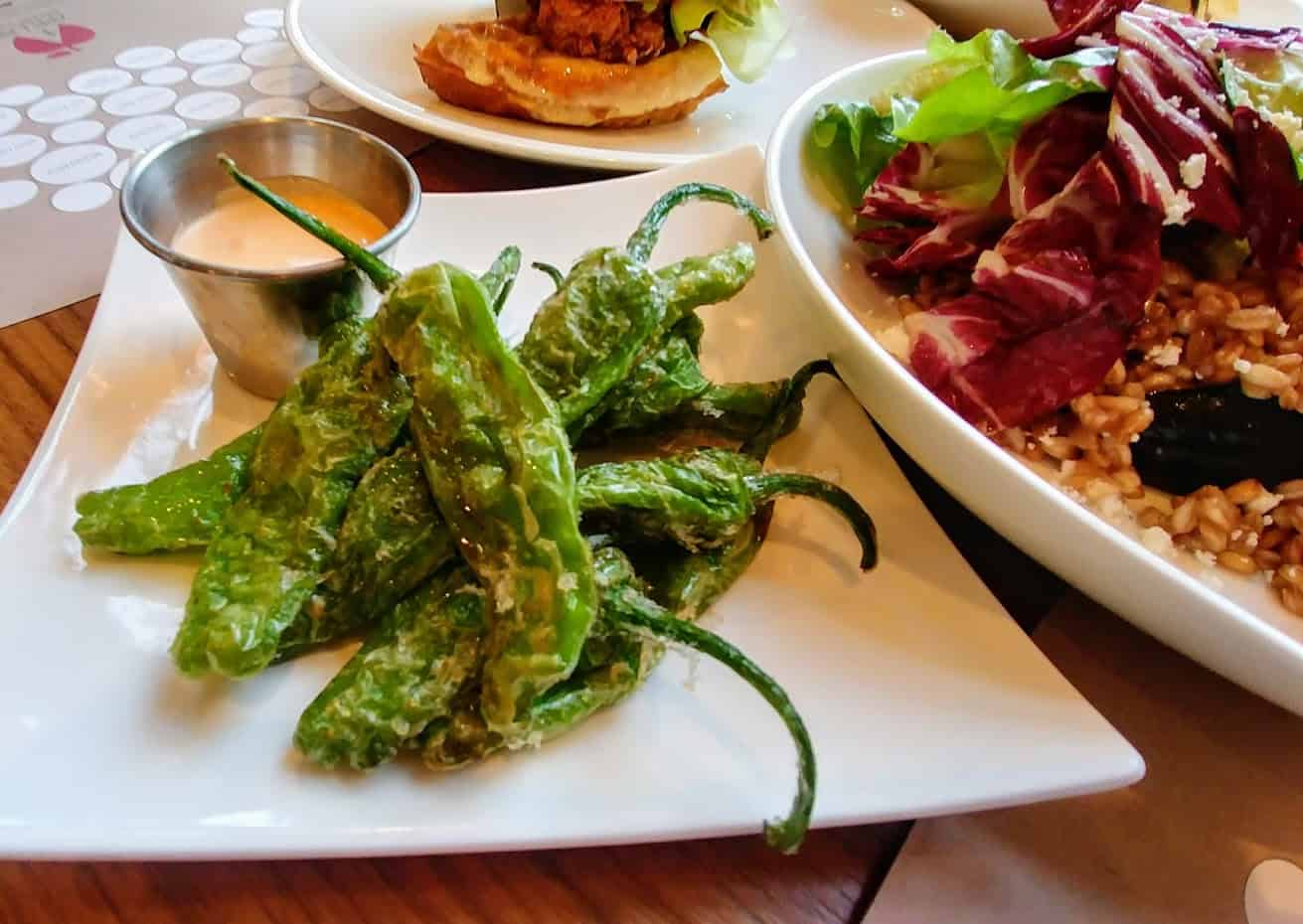 One of the dishes I fell in love with was the Shishito Peppers served with red chile aioli, which was lightly floured and blanched, making them just a bit crispy; some had a little heat and some were milder.  Simply delicious, I could have eaten them all, but I was kind enough to share with my sister! 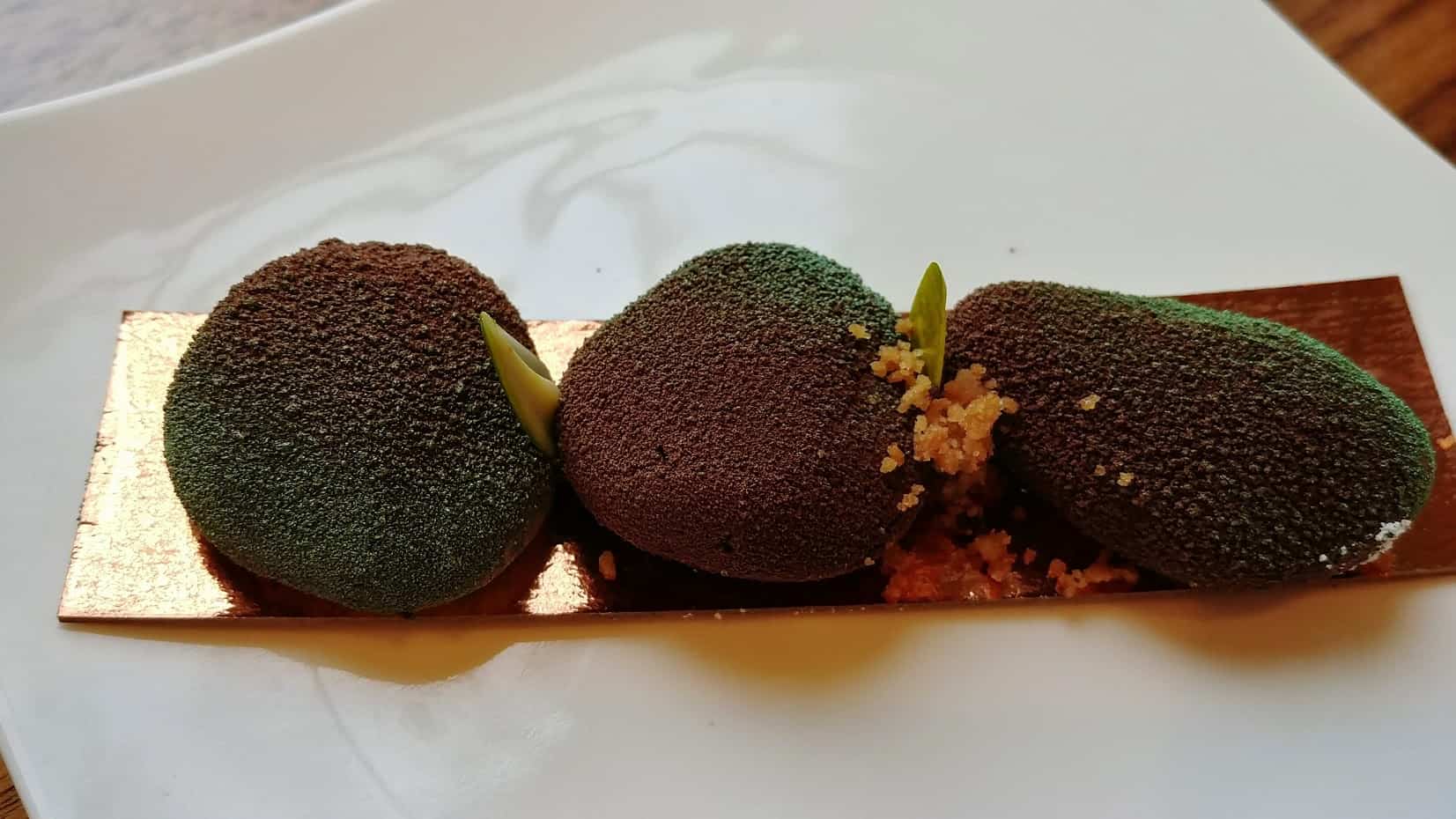 Then it was time for dessert; we decided to order three of them.

All these desserts were made out of Mousse, so they were very light. I recommend, as the server did, to eat this dessert right there. Or, if you take them home, then eat them in the next few hours because they are mousse and will lose their consistency.  Such a work of art! 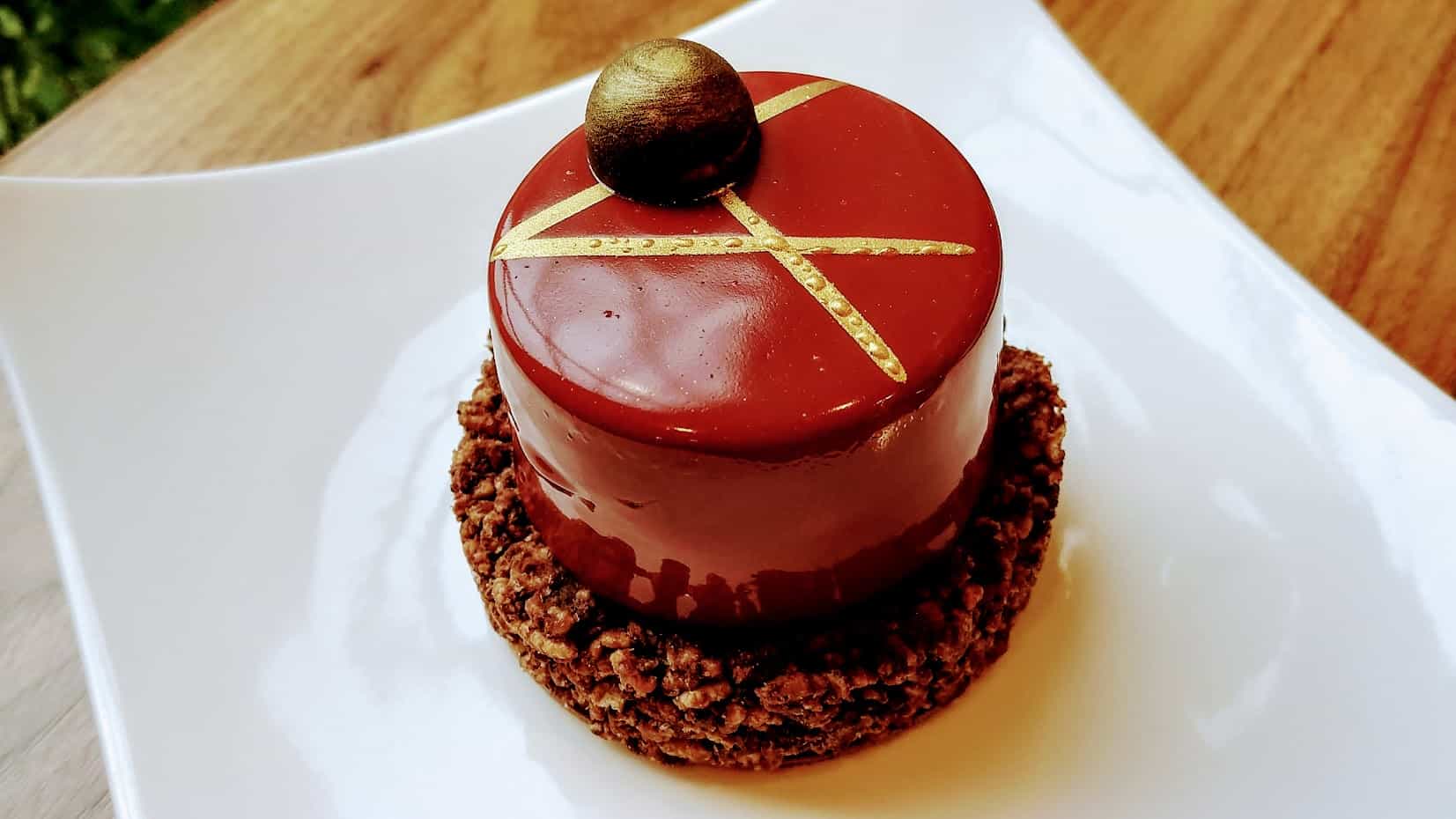 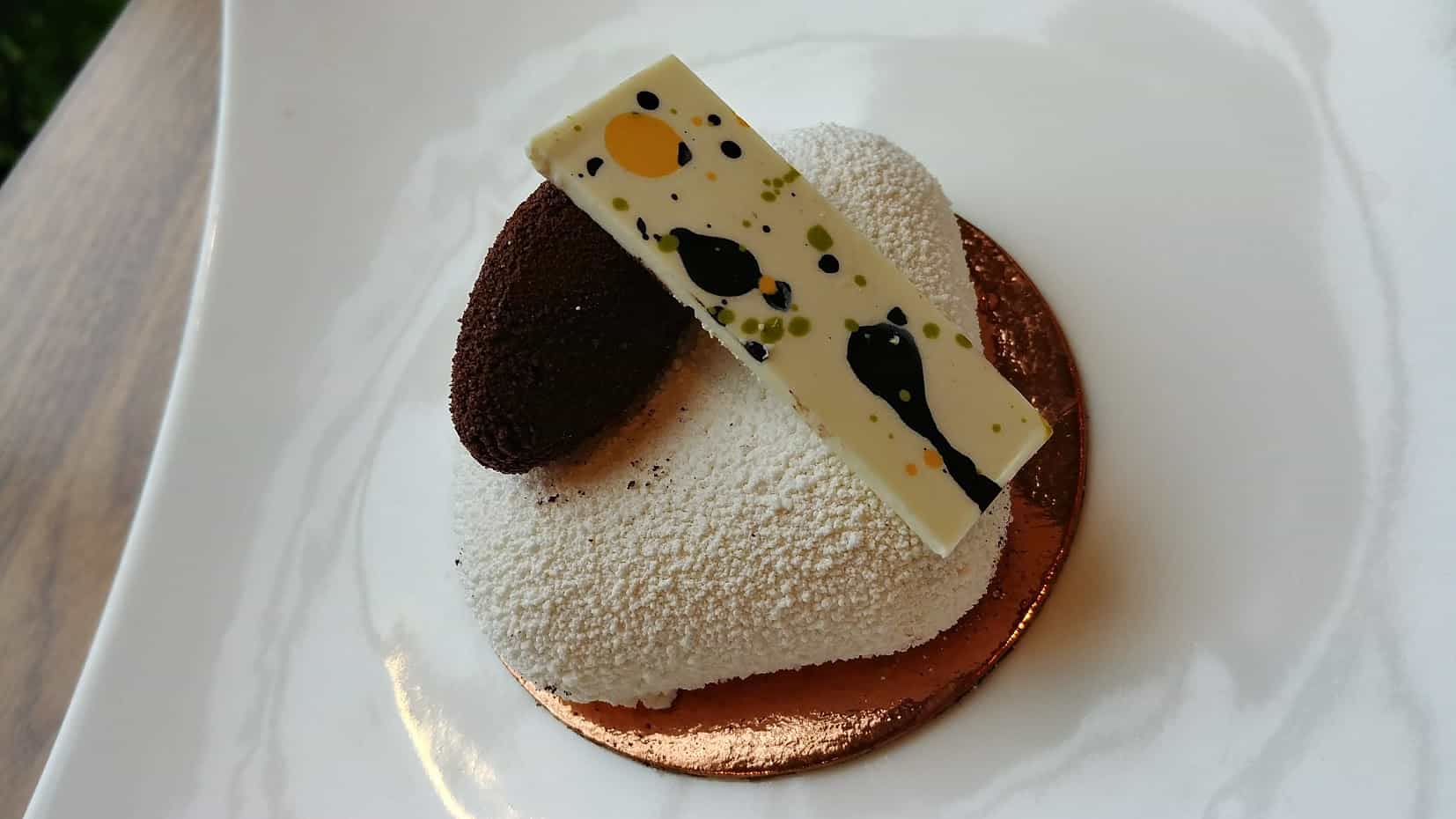 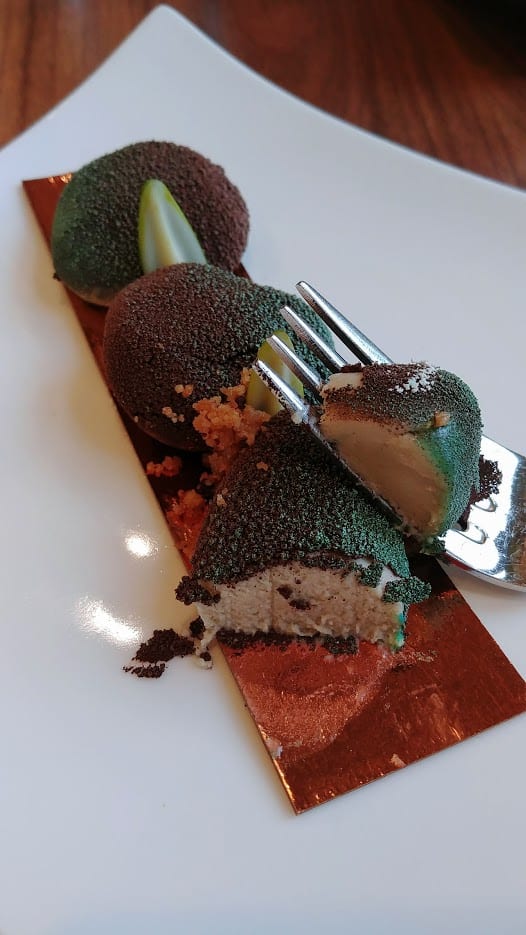 Of the three flavors, the banana custard was my favorite, but so was the chocolate chip cookie crunch. 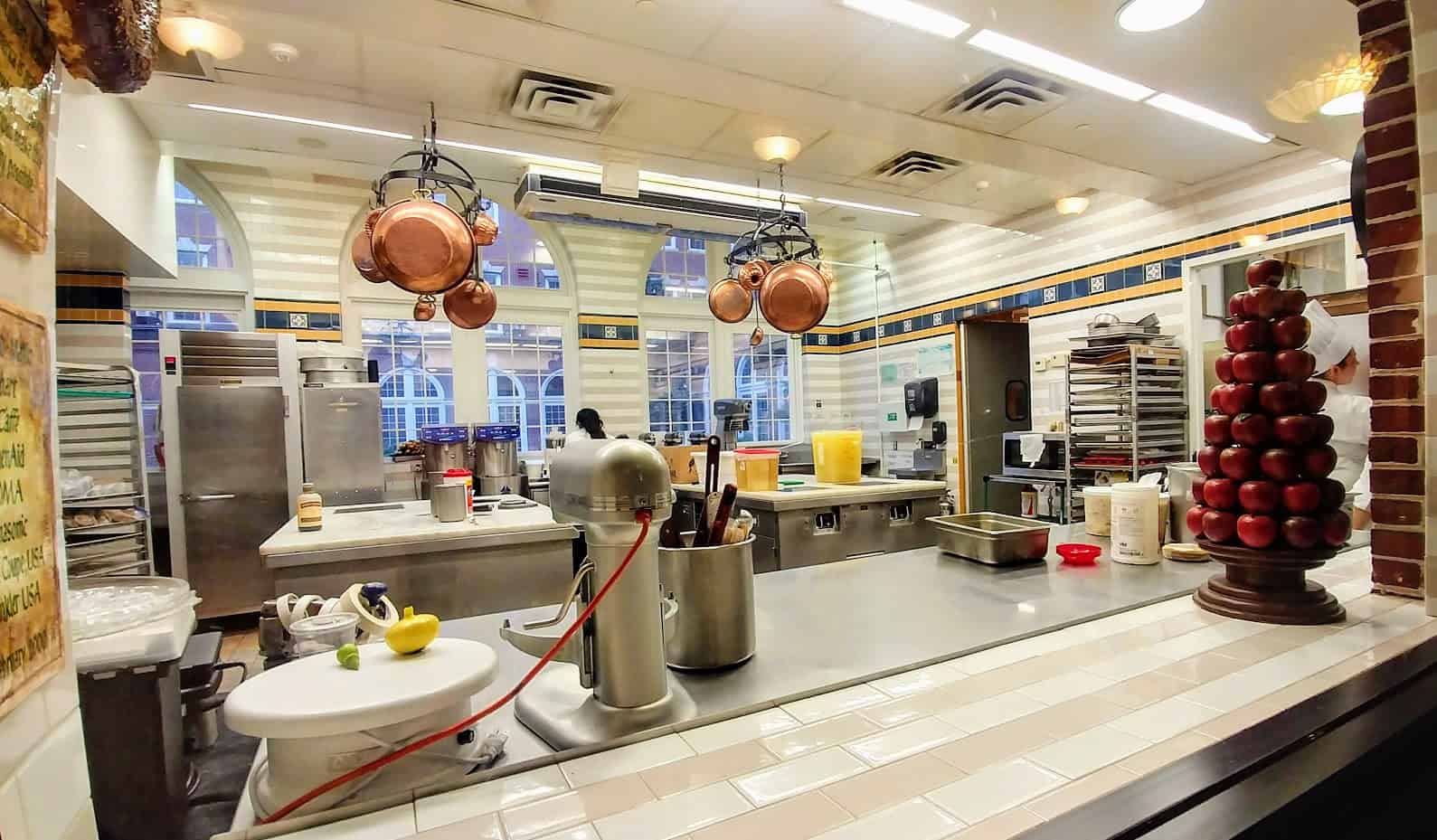 This is the kitchen where they made all our delicious food! 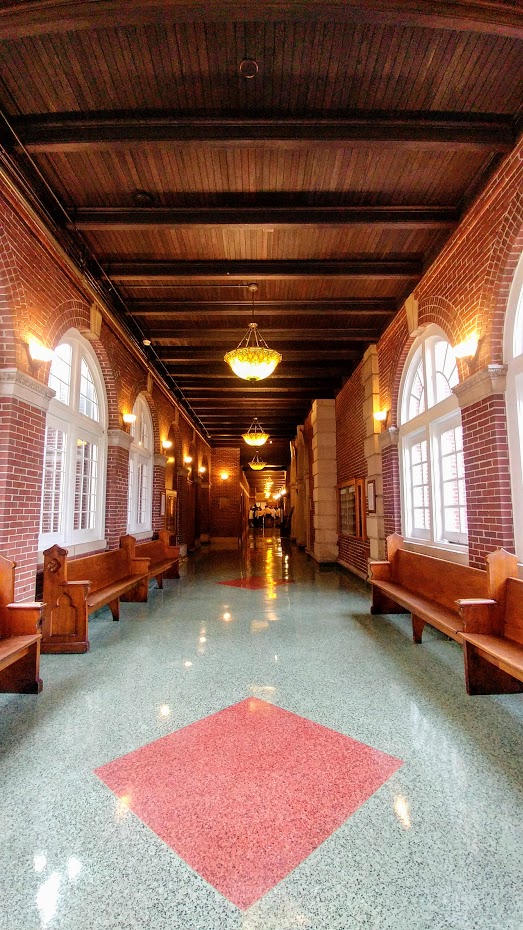 The halls of the campus reminded me of Hogwarts School from Harry Potter! 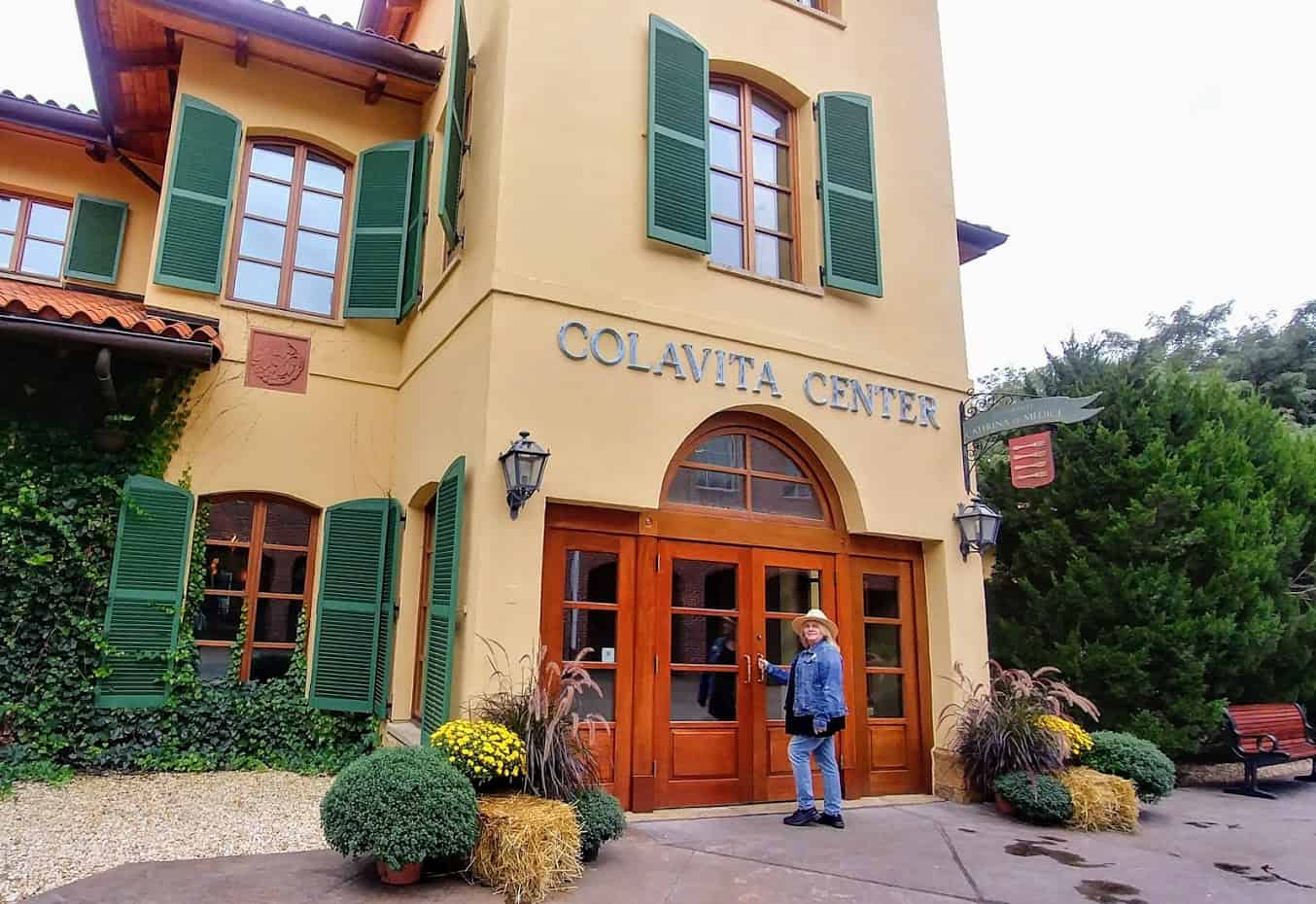 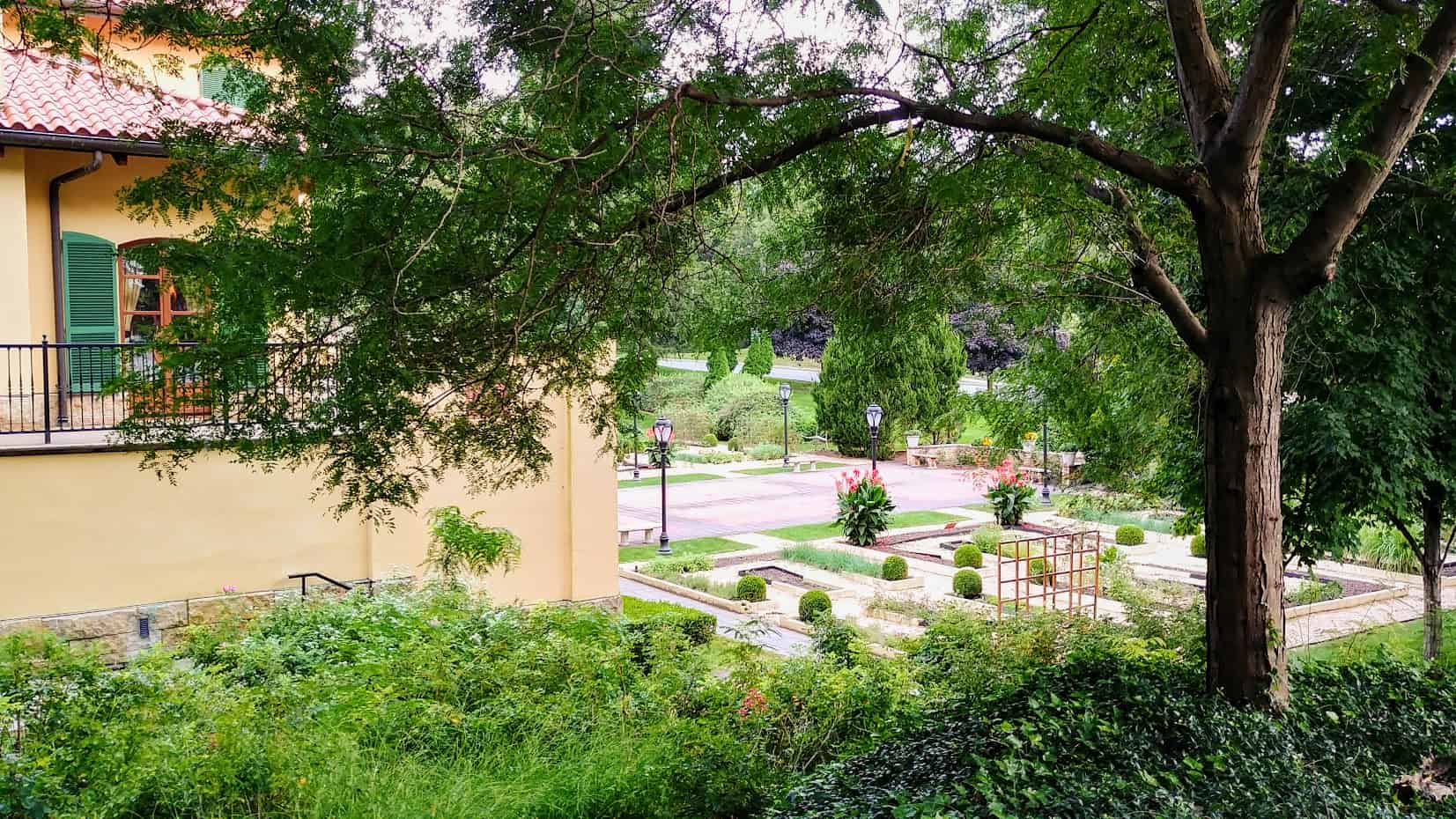 This is a photo of the herb garden where they grow and use these herbs in their kitchens.

I would definitely recommend going to the CIA  when visiting the New York, Hudson Valley area: it’s a must!

Have you ever wanted to go to cooking school?  Please reply to this post telling us!