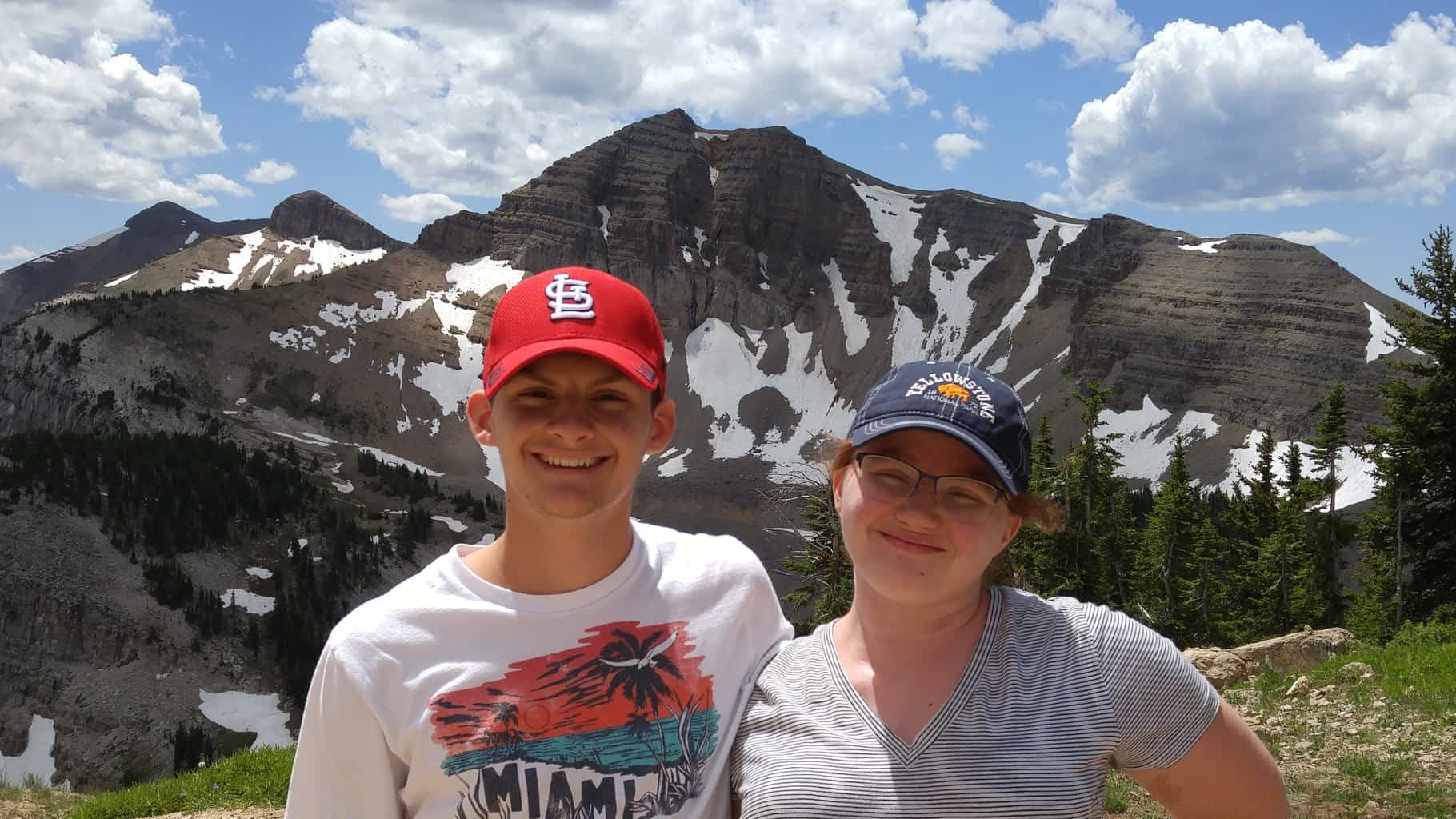 If you ever want to have family fun in the most beautiful area of our country, then I would suggest heading to Wyoming!  A few years ago, my family and I went on a 17-day trip starting from Iowa; then we went to all the following states: Minnesota, South Dakota, Montana, Wyoming, Idaho, Utah, and ended our trip in Colorado.  It was an incredible trip. I have written about a few of our stops already, which you can look at later by clicking here:

Today I want to talk about Jackson Hole and the Grand Teton Mountains.

When we were leaving Yellowstone National Park, the drive was so beautiful. Soon after we left the park, we hit traffic; we weren’t sure why, but then we saw cars pulling off the road.  We thought, “Oh no, not another accident!” Earlier that day we had to pull off the road in Yellowstone for four hours because of a terrible accident between a car and an RV.

FYI: it is so important to follow ALL the RULES and warnings when in National Parks; many deaths would be avoided if people follow the rules and notifications. One of them is to stay in your car and don’t feed or take close photos of the animals!

Well, the reason cars were at a standstill was because there were hundreds of Bison crossing the road. Yes, it was an incredible sight to see! We had seen many in the NE corner of Yellowstone just days before, but not as many as these.  We tried to get some video, which was only on our phone, so they’re not the best shots; yet we got to see these enormous mammals! I mean extremely large, a mature Bison bull weighs approximately 2,000 pounds, and a Bison cow weighs about 1,100 pounds.  Yes, they are HUGE!

When we finally got moving, it started to rain a little bit, first time and last for all 17 days.  But the scenery was still beautiful. When we were almost to Jackson Hole, outside my window we saw the Grand Teton Mountains. They were a breathing taking view.

We arrived at the very quaint section of the downtown area of Jackson Hole and stayed at the Hampton Inn; the staff was very friendly, and the accommodations were very nice. The girl at the front desk suggested a place she enjoyed going to eat dinner called The Merry Piglets Mexican Cafe.  It was in the town square, so we took a walk over to eat dinner. It was nicely decorated and the food was great.

After that, we just walked around a little bit and headed back to our hotel for a good night’s sleep after a long day at Yellowstone and our drive down to Jackson Hole.

The next morning we went to the Grand Tetons Village where you can take a gondola up to the top of the mountains.  I decided to stay in the village and went to the flea market to shop while my husband and children went to the top.  It was the middle of July, but there was snow on the mountains!

They actually had a little snowball fight up there. There was a restaurant at the very top of the mountains, so they had a bite to eat.  The photos don’t do these mountains justice, but they were so pretty! Many visitors took their bikes up there because they had riding trails on the top.

When they ventured back down, we met up and shopped a little more, had some ice cream, then headed back to our hotel.

We needed time to rest because when I was planning our trip, I made reservations to go to the local rodeo. It had been 20 years since I had been to one, and the children and my husband had never been before.  We all enjoyed it.

It started with two women riding their horses out into the ring, one holding the American flag the other the state of Wyoming flag.  The whole evening was packed with entertainment, from bull rides to clown acts; there was even a point the announcer asked all the children and a parent to come out to the main ring to participate in an activity with ponies.

It was a beautiful night; the air was cool and crisp, even though it was in the middle of July.  We had a great time.

The next day we went to town and shopped, and then we watched a reenactment of the old town shootouts.  It was entertaining, and the whole village comes out for it. That was cool to watch, and of course, it was humorous!

We then went to dinner at the burger place called Liberty Burgers, a restaurant owned by the same people who own the Mexican restaurant that we ate at a few nights before; we figured it would be great, and it was! I had a burger with Poblano Peppers and Queso Cheese, Mole Sauce with Sweet Potato Fries, my husband and son had a burger and onion rings, my son’s favorite!

We retired early to our hotel so that we could get up early and leave for our next destination of Salt Lake City.

We would love to go back to Jackson Hole to explore more and to do things we weren’t able to do on this visit, hope to go back soon!

Tell us if you have ever been to Jackson Hole or the Grand Tetons; let us know what you love doing when you visit the area.

Don’t forget to subscribe so that you can be informed when I create and share a new recipe or a place to visit!  It’s over to the right of this article.