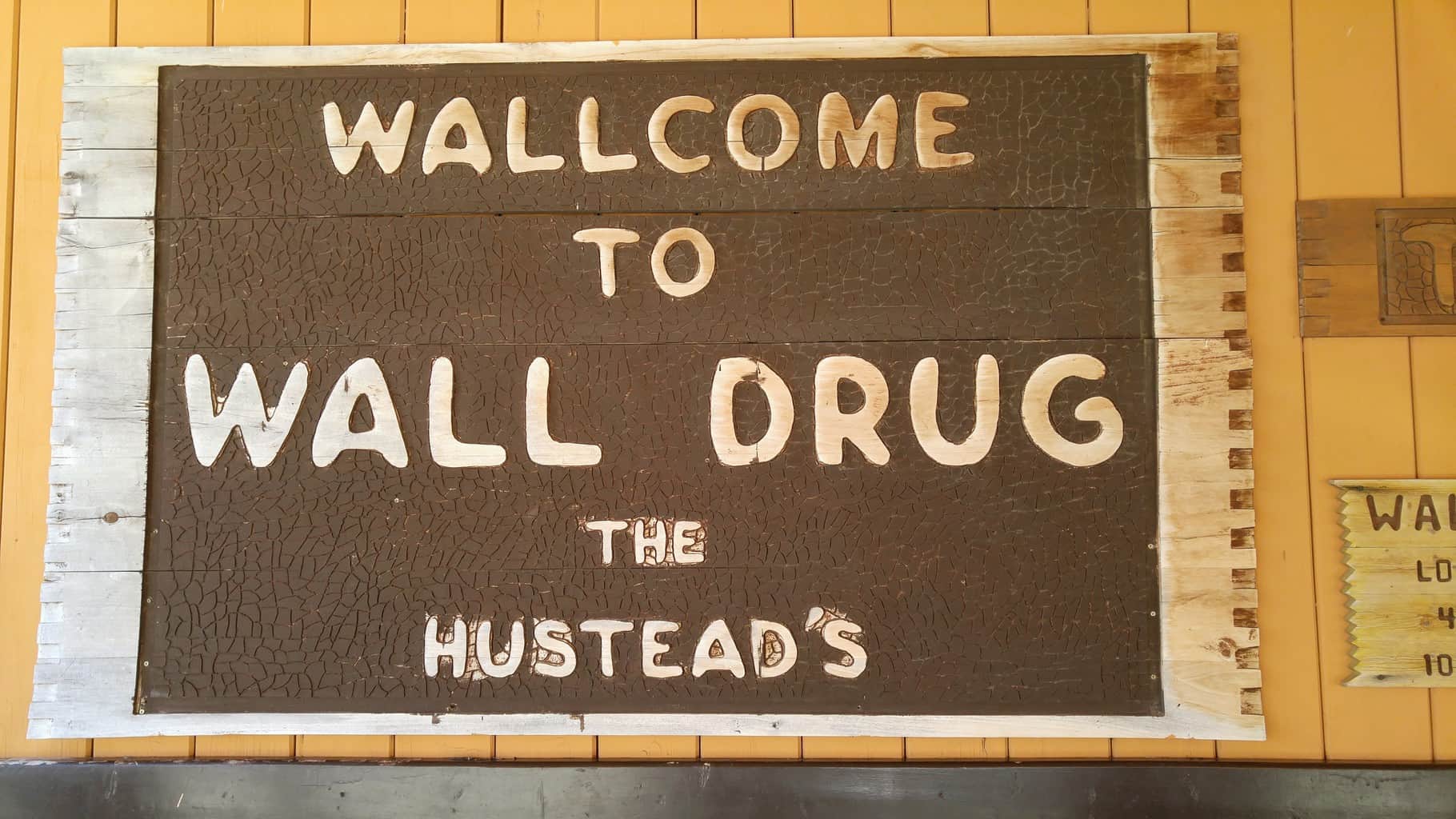 Wall Drug Store is located right outside of the Badlands in South Dakota and not that far from Mt. Rushmore and Crazy Horse.  It is also on the route when you are heading West to the Black Hills and Yellowstone National Park or heading east when you are returning from these well-known landmarks.

Wall Drug Store is known for its FREE ICE WATER! And with that free water, my friends, a sleepy store, four and a half years old, became a place that has 20,000 visitors a day in peak season, which translates into two million annual visitors! This is truly a lesson in being a dreamer and about someone who perseveres.

In 1931 Ted Hustead and his wife Dorothy, along with their four-year-old son, moved to Wall, South Dakota, to pursue their dream of having their own drug store and to help a poor community.

After graduating from college, Ted began working for other pharmacies in the Canova, South Dakota area, but he wanted more; and after marrying, he and his wife began their quest to fulfill the dream of owning their own drug store.  One of their requirements when looking to purchase their store was to be close to a Catholic church so they could attend every day. That’s when they learned about an opportunity in Wall, South Dakota.

Because Wall is a small town and not close to anything, Ted and his wife struggled to survive and to make their business profitable.  They even lived in the drug store, dividing their living space from the business space with just a blanket.

After trying to make it work for four and a half years, Ted almost gave up, but with the encouragement of his wife, their vision still before them, and creativity still working, they saved their dream store.

At this point, he and his family were able to get a small house down the street from the drug store, and soon their family grew with another child, a little girl.  One day Dorothy went home for a nap and returned fairly quickly back to the drug store because she couldn’t sleep due to all the noise coming from the nearby Highway 16 that the trucks would make. When she shared about the noise, Ted came up with this idea, FREE ICE WATER!  This was a prairie area, and it would get sweltering hot. There was no air conditioning back in that period, and people would be thirsty. So he made some signs, and he and a teen boy put up signs that would have the saying his wife would sing:  “Get a soda . . . Get a root beer . . . Turn the next corner . . . Just as near . . . To Highway 16 & 14. . . Free Ice Water. . . Wall Drug.”

You may be thinking to yourself,  ‘free ice water? Water is free.’ Not really, have you ever gone into a convenience store or gas station and try to get a FREE cup of water or ice?  Well, they usually, for the most part, say, “I have to charge you for the cup.” Plus they sell water, so why would they want to give it away for free? I don’t have a definitive answer to that, but to this day Wall Drug Store gives away FREE ICE WATER!

So on our 17 day trip out West, when we left the Badlands heading to Mt. Rushmore, we started seeing these signs that said FREE ICE WATER – Wall Drug Store. I thought that was funny and odd, but my husband told me he had visited the store when he was on this same trip with his family back in the 1970s.

When you get to the town of Wall, and as you are approaching Wall Drug Store, you will see a huge 80-foot statue of a dinosaur and basically a little village.

When we arrived we were all famished and thirsty, so we decided to eat at Wall Drug Store.  They have many different shops, which sell t-shirts to high-end boots; they employ 250 people in their little… or big… village area.  It has the original ice cream soda counter and signs that say FREE ICE WATER near the huge containers of water. The coffee is 5 cents, and they use the honor system: drop a nickel in the box for your coffee.

We didn’t get to stay long, but enough time to shop in the main store and eat at their cafeteria-style restaurant for some midwest comfort food.  I had roast beef with gravy on white bread with mashed potatoes ( see below). I believe the children had grilled cheese, and my husband had a burger.

The town of Wall is a place you need to visit when you are traveling in this region of the country.  You may hear it referred to as the ‘Window to the West’, ‘Gateway to the Badlands’, or ‘Heart of American Tourism.’

Both Ted and Dorothy passed away in the 1990s, both were in their 90s, and their son Billy managed it for a while until he physically could not run it due to his health; so now Billy’s son Rick runs Wall Drug Store.

A landmark made on hard work and a dream!

Let me know if you have been to Wall Drug Store!